Skip to main navigation Skip to content Skip to footer

Improving access to clean drinking water, one drop at a time.

World Water Day Awareness
Since 1993, March 22 has been designated as World Water Day by the United Nations to raise global awareness about the threat millions face from water-related issues. According to the UN, an astonishing 2.5 billion people do not have access to adequate sanitation, and of those, 783 million people (roughly 11 percent of the global population) do not have access to a clean source of drinking water.1

The Impact on Global Health
This lack of access to safe water has a serious impact on the health and well-being of our world’s citizens, especially those living in developing countries where roughly 80 percent of illnesses are linked to unclean water or poor sanitation.2 These illnesses inhibit day-to-day life, especially for children, who miss 443 million school days every year as a result of water-related diseases.3

While more than four in five U.S. consumers are concerned about the serious issue of global water safety and security, many do not recognize its severity. In fact, according to a survey commissioned by The Clorox Company, 83 percent of respondents were unaware that diarrheal disease — a condition often linked to water-borne illness — is a leading cause of death for children under age 5. Sadly, nearly one out of every five children under age 5 die as a result of dehydration, weakened immunity or malnutrition associated with diarrhea.4 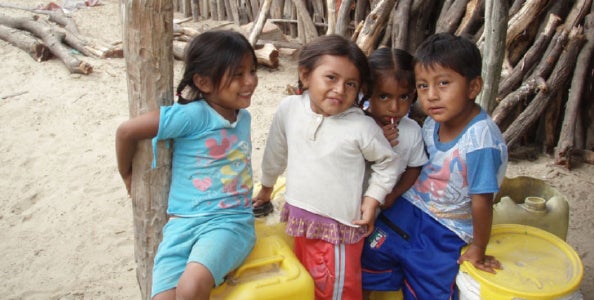 A Simple Solution
Recognizing the serious issue at hand, The Clorox Company approached PRISMA, a nonprofit organization dedicated to strengthening the resources of the poor and other vulnerable groups across in Peru, with a simple — yet surprising — solution to improve drinking water: bleach. Sodium hypochlorite, the active ingredient in Clorox® bleach, is one of the most effective disinfectants on earth, killing more than 99 percent of bacteria and viruses commonly found in untreated water, such as E. coli and cholera.

The Clorox® Safe Water Project
Through the Safe Water Project, Clorox is addressing the chronic problem of unsafe drinking water in Peru — a country where one in seven people don’t have access to safe water5 — by installing public bleach dispensers. These bleach dispensers provide a low-cost and sustainable solution for water treatment and disinfecting for use in poor areas where people collect water from an untreated, communal water source.

Every day more than 350,000 liters of water are purified with bleach using these innovative dispensers, and over five years, the Clorox® Safe Water project will use the disinfecting power of bleach to provide more than 100 million liters of safe, drinkable water to 25,000 people every year.

This World Water Day, we stand with the UN and other organizations that are dedicated to building awareness around the serious and life-threatening issue of water safety while also working diligently to find solutions to this global crisis.

Dr. Laundry will get back to you right away.

Perhaps exploring our other How To categories might help

Get cleaning tips, offers, and product information delivered straight to your inbox. By signing up I am agreeing to the Terms & Conditions and have reviewed the Privacy Policy.

This is the beginning of something great.

Member of the CLX family of brands